This easy recipe for BBQ chicken skillet baked nachos is a great way to add variety to your nacho game.

Nachos.....for dinner..... on a weeknight.....sign me up!! Who can resist the cheesy crunchy spicy goodness of a plate of chips loaded with your favorite toppings and served in a rustic cast iron skillet for added "dramatic effect?" Not me. If having nachos on a weeknight seems a little too cray cray for you, there's still 3 games left in the NCAA March Madness tournament....that's plenty of time  for you make cast iron skillet nachos. And most people would say that nachos during a game is totally appropriate from a "diet" standpoint.

But in all seriousness, you don't need to feel guilty about eating these nachos. No sir. They're topped with lean shredded chicken breast and loaded with veggies. Veggies as in thin sliced crispy zucchini {fyi: it pairs delightfully well with BBQ sauce) and smokey shishito pepper. Say wha?? Shi-shi-to peppers. From Trader Joe's. This store just gets it. Every time I go there, it's an experience. Not just an everyday trip to the grocery store - more of a trip to a treasure trove of foodie-approved delicacies that I can't seem to find anywhere else in Lincoln. I walk through the door of Trader Joe's and immediately hear a choir of angels singing in my head.....

We should probably get back to singing the praises of these nachos....I used as little cheese as humanely possible for a skillet full of nachos. And if you really want to get down to the nitty gritty of wholesome, I used organic whole grain sweet potato tortilla chips. This is as healthy as nachos can get, my friends. And that doesn't mean they're not good. Far from true - these were "da bomb".....in the words of my dear husband. He'd eat them for dinner every week if I'd let him.

Now I've got to tell you a little secret before we move on to the recipe....this is one of the best time-saving tricks I've ever learned in the kitchen. Did you know that you can shred chicken in the bowl of a stand mixer using the paddle attachment??? Perfectly shredded chicken. No knife and fork required. 10 minutes of time saved. It's true - try it. As soon as I sauteed some chicken breasts, I plopped them in the bowl of my mixer, set the speed on low, and let it go for about 2 minutes. Hot, juicy shredded chicken ready to pile on top of yo cho's. Let's eat, kids! 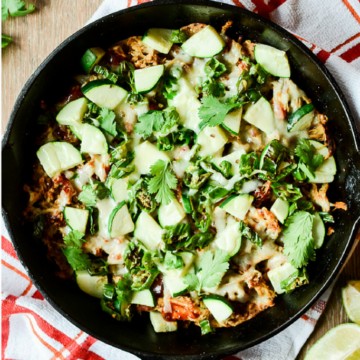