This cozy Potato Leek Soup recipe is so easy to make in your slow cooker or on the stovetop and is topped with homemade croutons! It's a healthy potato leek soup that does not use cream and can easily be made vegan if needed.

Potato Leek Soup is a classic winter staple that I love to include in my arsenal of cozy soup recipes. I think the best potato leek soup recipe is one that's versatile and full of flavor. My version has options for making the soup in the slow cooker, on your stovetop, and comes with lots of options for delicious toppings so that everyone can customize their own bowl!

This healthy potato leek soup recipe is lightened up with the use of low-fat sour cream and a small amount of evaporated milk to give it a sublimely creamy texture and slightly tangy flavor. You can easily make a vegan version of this potato leek soup with the substitution options I offer in the recipe below.

Once you learn how to make a classic potato leek soup from scratch, you will be delighted at how simple it is to whip up in a flash and customize to your liking. *Full printable instructions are found in the recipe card at the bottom of post.*

Step 1: Prepare your veggies. This will include washing and cutting the potatoes and celery, washing and chopping the leeks, and mincing the garlic (unless you use pre-minced).

Prepare leeks by cutting off the root end and the thick, dark green leaf parts. Next, slice the leek in half lengthwise. Soak the leek halves in a bowl of water for 5 minutes, using your fingers to pull apart the layers slightly to remove any grit or sand inside. Pat the leeks dry with paper towels and then proceed to chop them with the celery.

Step 2: Saute the aromatics. A little bit of butter and olive in your saute pan will add a great flavor to the veggies and also prevent the butter from burning in the pan. Add the garlic during the last 30 seconds of cooking, then season the whole mixture with a sprinkling of salt and pepper.

Step 3: Add the flour to the veggies, then cook for about a minute over low heat to remove the starchy flavor of the flour.

Step 4: Add your veggie mixture to the slow cooker (if using), and then slowly whisk in the stock and evaporated milk. Add the potatoes, then cook for 3 hours on LOW in the slow cooker or simmer over low heat on the stovetop for 20-30 minutes until the potatoes are tender enough to easily be pierced with the tip of a pairing knife.

Step 5: Add the sour cream and puree the soup to your liking. I like to use an immersion blender to puree the soup directly in the slow cooker or pot. You could also use a potato masher. Blend until the soup has the consistency you like - I prefer a slightly chunky texture. You can also add extra broth or stock at this step to thin the soup if needed.

Step 6: Ladle the soup into bowls and serve with the toppings of your choice! I like to make some simple homemade ciabatta croutons, which you can find the instructions for in the recipe card at the bottom of the post. Tasty toppings include:

Below are some of my best tips for making this potato leek soup, as well as some answers to commonly asked questions!

Which potato is best for soup?

Potatoes such as the Yukon Gold variety that have a medium amount of starch and a thin skin are best for soups. This is because they will hold their shape if you want the soup to be chunky, and they also do not require peeling beforehand.

How do you thicken leek and potato soup?

Adding a bit of flour to sautéed aromatics in a soup is a great way to thicken it slightly. You want to cook the flour lightly before adding any liquid to your soup to ensure that any starchy flavor is removed. An all-purpose gluten-free flour substitute can also be used for thickening in this recipe.

How long with leek and potato soup keep?

The soup can be stored in the fridge for up to 4 days before the texture starts to become compromised. Soup stored longer than this may start to separate. Do not consume it if stored for longer than 7 days.

Can you reheat potato and leek soup?

Potato leek soup is easy to reheat, so long as you do it gently and stir throughout the reheating process. Either reheat in a small saucepan on the stovetop over medium-low heat, stirring often, or microwave at 80% power for 3 minutes, stirring halfway through heating to evenly heat the soup. I like to add a bit of broth or milk towards the end of heating to thin out the soup to consistency that I like.

Can you freeze potato leek soup?

Potato leek soup is not a good candidate for freezing, as the sour cream separates from the rest of the soup during the thawing process. The soup will have a watery texture upon thawing and will not become evenly creamy. It's best to enjoy potato leek soup fresh within a few days of making it!

If you are in search of more easy and delicious soup recipes, check out some of my favorites below!

Are you ready to make some potato leek soup? I’m so excited for you to try this recipe. Once you get the chance to make it, please let me know how it turns out for you! 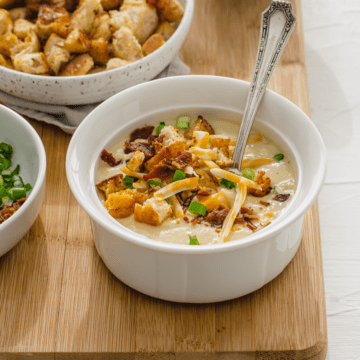 This cozy Potato Leek Soup recipe is so easy to make in your slow cooker or on the stovetop and topped with homemade croutons. It's a healthy potato leek soup that does not use cream and can easily be made vegan if needed.
Tried this recipe?Mention @sweetcayenne5 or tag #sweetcayenne!
Print Pin Rate
Prep Time: 20 minutes
Cook Time: 3 hours
Total Time: 3 hours 20 minutes
Servings: 6 servings