The perfect snack to go with any game night is this easy recipe for kettle corn. This post is all things dedicated to GAME NIGHT! There's nothing my family enjoys more than a good board game, and we've discovered some amazing new games over the past few years that I just HAVE to share!

For as far back as I can remember, my parents, siblings and I have always loved to play games together. Sorry, Life, Mall Madness, and Splat were some childhood favorites - I wish we still had Mall Madness because it was the best! As a teenager I became known around the ice cream shop where I worked for hosting game nights that we would have any chance we could get - something that my coworkers had initially turned their noses up at became a tradition we enjoyed for over a decade (if you're an original Custard Corner gamer, leave a comment)!

Over the past few years, our family has discovered some new board games that we are OBSESSED with! They are more focused on strategy than games we've had in the past, and definitely bring out the competitive sides of everyone who gets involved. All the games I'm mentioning today are great if you just want to get lost in something for an hour or two, AND all are really fun with just two players! Ryan and I will often spend a Sunday afternoon playing any of these and it's the best on a snow day! And you if you're going to have a game night, you must have a good snack, so I'm sharing a recipe for perfect kettle corn below, so scroll all the way down for that!

P.S. A lot of these are on MAJOR SALE this week due to holiday deals!

Harry Potter Hogwart's battle card game. This is a fun one. It is four players and has seven different games included. As the games advance, the characters do as well. New spells and skills are learned as one moves forward through each game level. For those who have mastered the original game, there is the Harry Potter Monster Box Expansion, which is the continuation of the original game with additional villains, scenarios, and one more player character. Both Harry Potter Battle games can be found as a bundle here.

Ticket to Ride (2-5 players) | In this game, you build train routes across the USA based on the route cards you draw. Completing routes and having the longest continual track before the end of the game will help you score the most points! Ticket to Ride is really fun with just two players, but gets MUCH harder with more players because there is a higher chance your route will be disrupted by someone else! There is an expansion pack available that provides new routes and ways to play the game if you want to shake things up a bit.

CATAN (2-4 players, or 5-6 with the extension) | This game is a bit more challenging than Ticket to Ride, and involves trading, buying, and settling around a board to control parts of the available land. The game can easily take 2+ hours if you have more than 4 people. The pieces that make up the board can be arranged a different way each time you play, which provides a ton of variety and results in a unique experience each time you play! There are a lot of expansion packs available for Catan that add more players and change the game up even more, which we love!

Carcassone (2-6 players) | This game of European origin has won MANY awards and involves a whole world of expansions and variations on the original. At first glance, it seems very similar to CATAN in the way it involves claiming various parts of a landscape. However, the gameplay is very different and involves many strategies for winning. The rules are fairly simple, a lot is left up to chance, and you can win by teaming up with other players or going about things on your own. Like CATAN, there is a whole world of Carcassone gameplay waiting to be discovered! We started with the basic version, but have played the Big Box version with friends and would like to get that one eventually. The Big Box includes a few ways to expand the board and change up the gameplay, which keeps things interesting!

Bob Ross: The Art of Chill (2-4 players) | Confession: I had no idea who Bob Ross was before we bought this game. So how did we come to buy it? Well, Ryan and I were looking for some new games to play together over the holidays and found this one while researching. It had TONS of great reviews, and a lot of people said the game was really fun even if you weren't familiar with Bob Ross. Turns out, they were right! We have yet to play with more than 2 players - but it is really fun with two! In the game, you "paint" pictures with Bob (no artistic talent required!), and try to paint as much of the picture as you can before he beats you to it! It's kind of a relaxing game to play, believe it or not, and Bob's "chill" personality really comes through!

Disney's Villainous (2-6 players)  | While all of the games I've mentioned are really amazing, this one takes the cake! Ryan and I have owned it for just 2 weeks but have played it 7 times! Villainous is truly unlike any game I've ever played - and don't let the "Disney" name fool you into thinking it's for kids! The premise of the game includes 6 different villains, and each player chooses one to play for the entire game. Each villain has a unique objective they have to achieve in order to win and unique abilities that determine how their game is played. The more "villainous" you are to other players, the higher your chances of winning. There are distinct offensive and defensive tasks you must keep track of to win. The game seems complicated at first, but once you get familiar with each villain and how they play the game, the more you will become addicted to playing!

Jackbox TV Party Games {Party Pack 2) | We LOVE to play the Jackbox games on our TV through the Apple TV! Quiplash and Fibbage are our favorites, which is why I'd highly recommend the Party Pack 2 because they are both included! Each person (up to 8) connects to the game via their smartphone and plays with their phone. I can't tell you how HILARIOUS these games are - it's a chance for each player to display their own unique personality, humor, and creativity! Both Quiplash and Fibbage involve players "filling in the blank" and coming up with their own answers to questions or completion of statements. Players then vote on the answers they like best!

Whirly Pop | If you are a popcorn lover, you NEED a Whirly Pop in your life ASAP! It seriously makes the BEST popcorn on the stovetop. Every time we make popcorn in this for guests, they can't get over how good it is! And several people have gone home and bought one! You can make plain popcorn in it and then flavor it afterward, like I did with these Cupid Crack and Buffalo Cheddar versions, or make Kettle Corn in it with the recipe below!

Do you have any game night essentials? I'd love to know - I'm always on the hunt for great games! Leave a comment below and let me know! 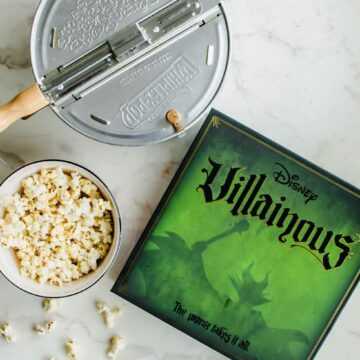