This sumptuous bread pudding is made with soft, pillowy brioche bread that's baked in a rich, luxurious custard and topped with buttery vanilla sauce. Trust me when I say that it's utterly divine! The vanilla bread pudding sauce will absolutely change your life.

Is there really any dessert that's more comforting and luxurious than bread pudding? Think about it - rich, bready carbs soaked and then baked in butter, cream, eggs, and sugar and smothered in more cream, butter, and sugar! Divine. Decadent. Devilish. All of those adjectives would be totally appropriate.

I've made this bread pudding with buttery vanilla sauce for three different parties over the course of this month. For a few reasons: 1. It's that good. 2. It feeds a crowd. 3. It's ridiculously easy to make. 4. It's so easy to make that it's practically foolproof. I've gotten a range of comments from "this is the best bread pudding I've had in my life" to "I'm going to have to have seconds of this" to "I think this is my favorite dessert of all-time." Don't mean to brag; just trying to describe to you how amazing it is so YOU can be a rock star and make it as well!

But honestly, people are either going to love me or hate me once they read the recipe. Granted, it's not as decadent as some bread pudding recipes I've seen. But, don't be fooled. It's extremely indulgent and should be reserved for the most special occasions....preferably the ones where you'll be feeding lots of people and therefore not tempted with the leftovers!

Brioche bread - let's start at the very beginning. Those of living in small towns or out in the country may see the word "brioche" and think "that's too fancy" and "I won't be able to find that." Y'all. I got my brioche at WALMART. No joke. Their French recipe brioche from the Marketplace line is heavenly, and I've found it thus far in VA and TN. BUY IT.

Apple cider - I'll be honest, the cranberries are soaked in apple cider because when I was developing this recipe, I knew I'd be making it for a big church staff party. In other words, I needed a bread pudding recipe that was alcohol-free. That's pretty rare on the interwebs! But the apple cider works beautifully here and really pairs so well with the dried cranberries.

There are a couple different camps out there that have their own opinions about what the final texture of bread pudding should be. Some like a moist, silky, custard-like texture and others prefer a more dense, crispy-topped texture that, to me, more closely resembles the texture of French toast or monkey bread. I'm still trying to figure out if the variation depends on what region of the country you live in; so if you know, please enlighten me! For now, you should know that I'm in the moist, silky, custard-like texture camp.

You can substitute French bread for the brioche if you are in a pinch. And you can play around with the milk. I've used only whole milk before, a combo of half whole milk and half ½ and ½, and a combo of heavy cream and 1% milk and did not notice a distinguishable difference between any of those combinations. And of course, if you love raisins, feel free to substitute those for the dried cranberries.

Are you ready to get make this Bread Pudding with Buttery Vanilla Sauce? I’m so excited for you to try this recipe. Once you get the chance to make it, please let me know how it turns out for you! Leave a comment and rate the recipe below. This will help me with the creation of future recipes!

I’d also love to feature your creation in my monthly newsletter, so you can upload a photo to Instagram or Twitter with the tag @sweetcayenne5 to be featured! You will find me on YouTube and Pinterest as well. 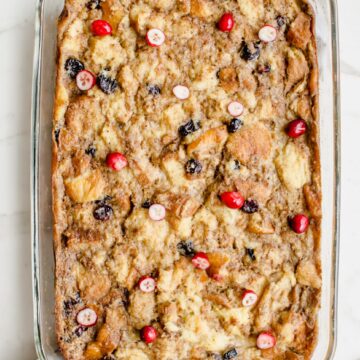 For the bread pudding:

For the vanilla butter sauce:

For the bread pudding:

For the vanilla butter sauce: 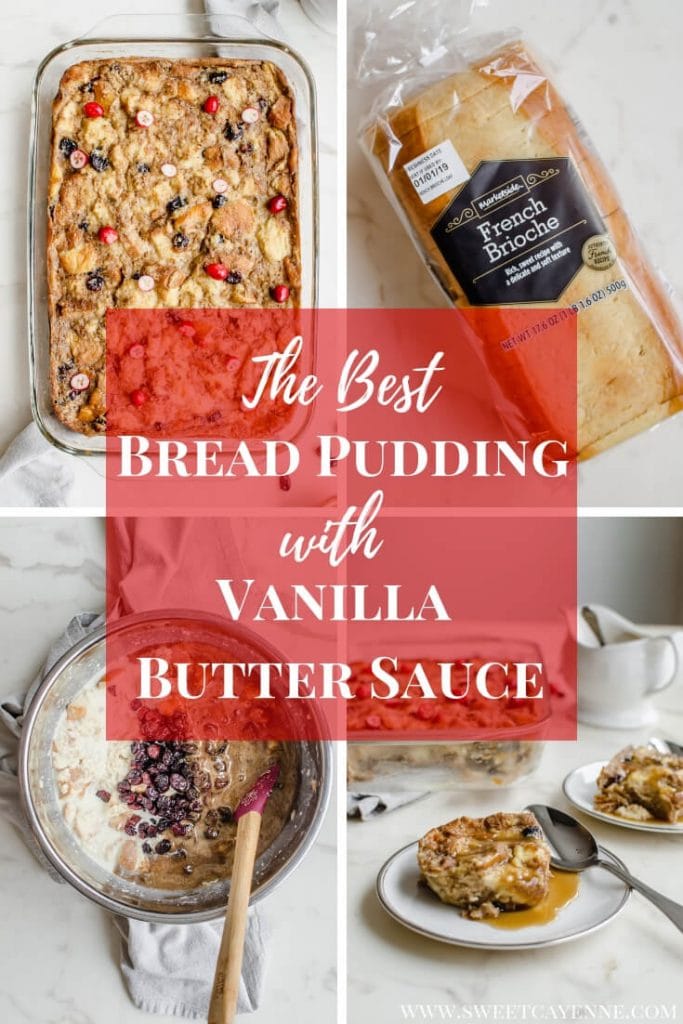