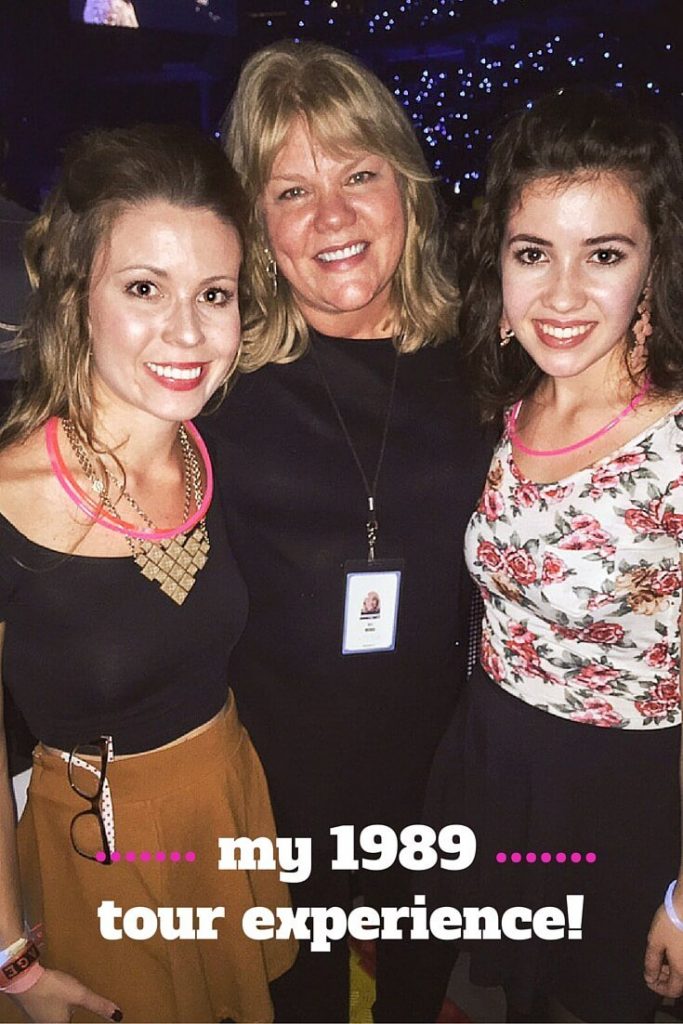 Last weekend, Courtney and I had the amazing experience of getting to attend Taylor Swift's 1989 Tour in Omaha, NE. Omaha was lucky enough to get two nights with Taylor performing there, and I had bought tickets for the first concert on Friday night waaaayyyyyy back in December when I was living in Nebraska! This was our first time to see Taylor perform in a headlining tour (I had seen her at a small venue about 10 years ago) and we both agreed that we wanted to make the most of our experience!

If you are a die-hard Swiftie, you're probably well aware that in past tours, T-Swift's mom, Andrea, has established the tradition of scouting out excited fans at the concert venues and making their concert experience extra-special. Mama Swift does this in the form of upgrading seats, inviting fans to watch the concert with her at the front of the stage, or even passing out admission tickets to the top secret "Loft 89" meet and greet with Taylor after the concert.

Courtney and I decided that it would be our mission to get paid a visit from Mama Swift during the concert, so we scoured the internet for reports from other Swifties about their concert experiences. We took all their tips into consideration and made a strategy for the big night; but first we agreed that no matter what happened, our #1 goal was just to have as much possible and enjoy seeing Taylor perform! 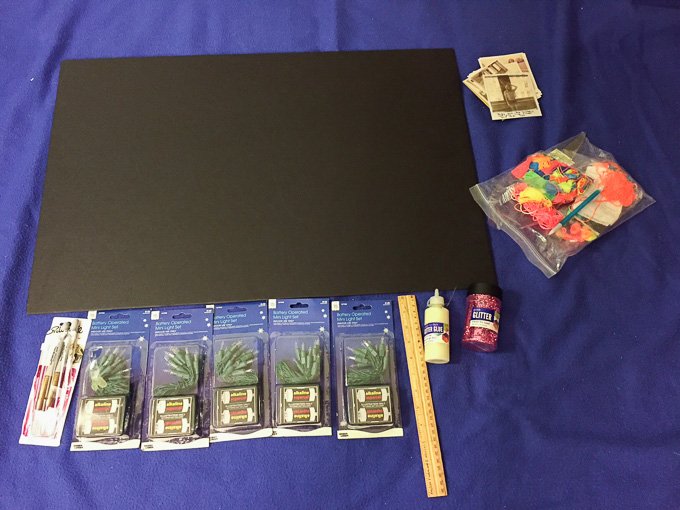 Our sign was inspired by the first song on the 1989 album: "Welcome to New York." We decided to re-create the infamous "I heart NY" sign. The poster would definitely NOT have been successful without the help {well, he did most of the work!} of my artistic and precise husband, Ryan. He researched the original "American Typewriter" font, did some calculations, and traced it to scale in pencil on our black foam poster board. We filled in the letters with a gold Sharpie and then filled in the heart with clear glitter glue and pink glitter.

It was a very sparkly poster.... 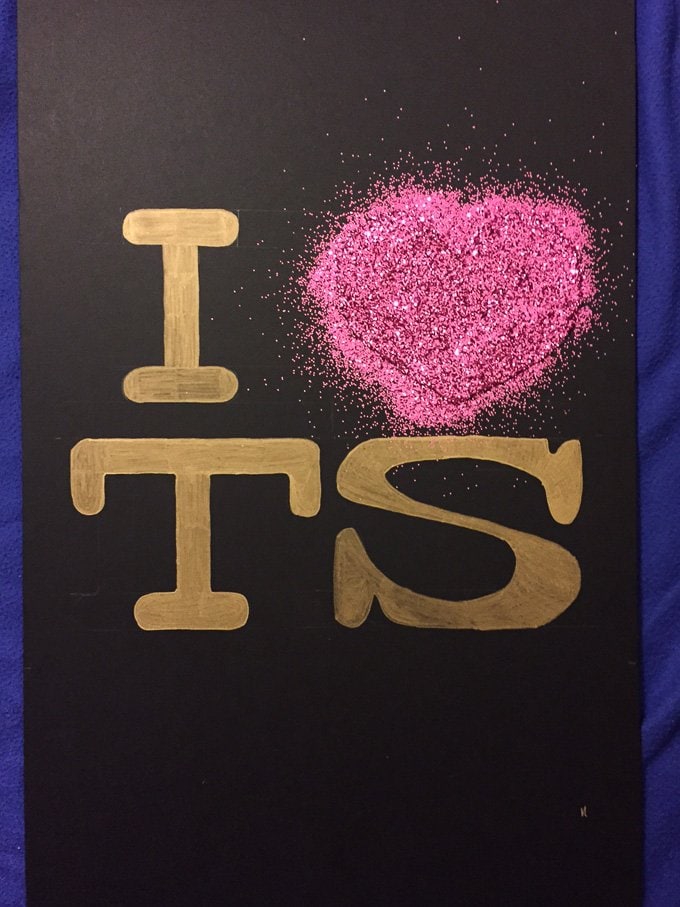 We sealed the glitter to the board by spraying the heart with hairspray once the glue had dried. Next, we glued the Polaroids of Taylor that were included in the deluxe 1989 cd package to the top and bottom of the poster. We finished by using a wooden dowel to poke holes in the letters for Christmas lights to go through. We used a total of 4 strings of lights with 15 lights per string. The lights were powered by battery packs, which we anchored to the poster with duck tape pockets that Courtney made. 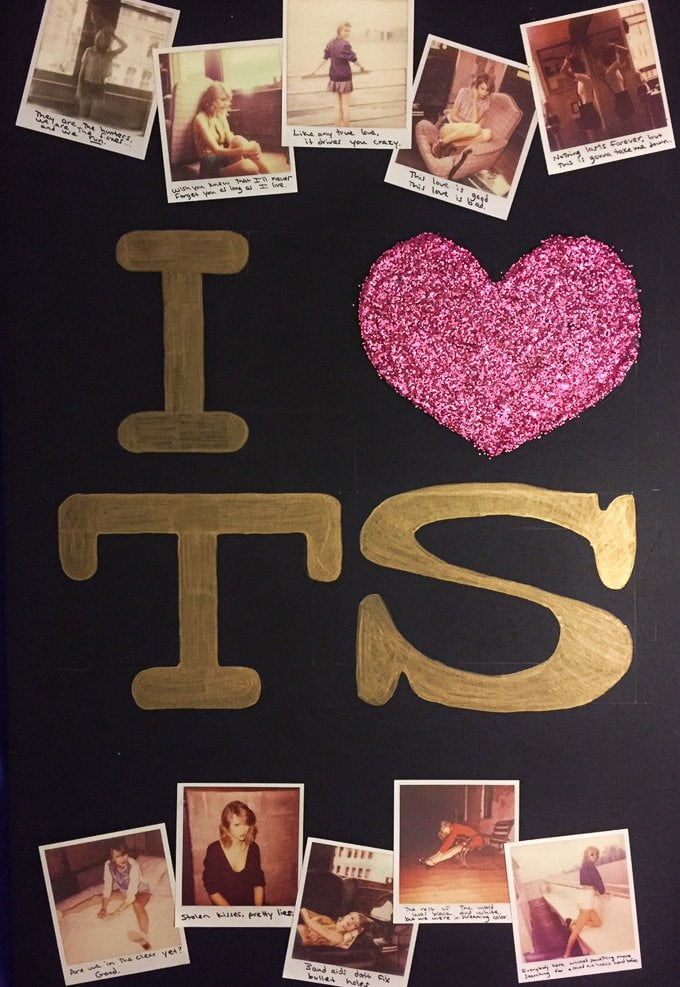 And below is the finished product! 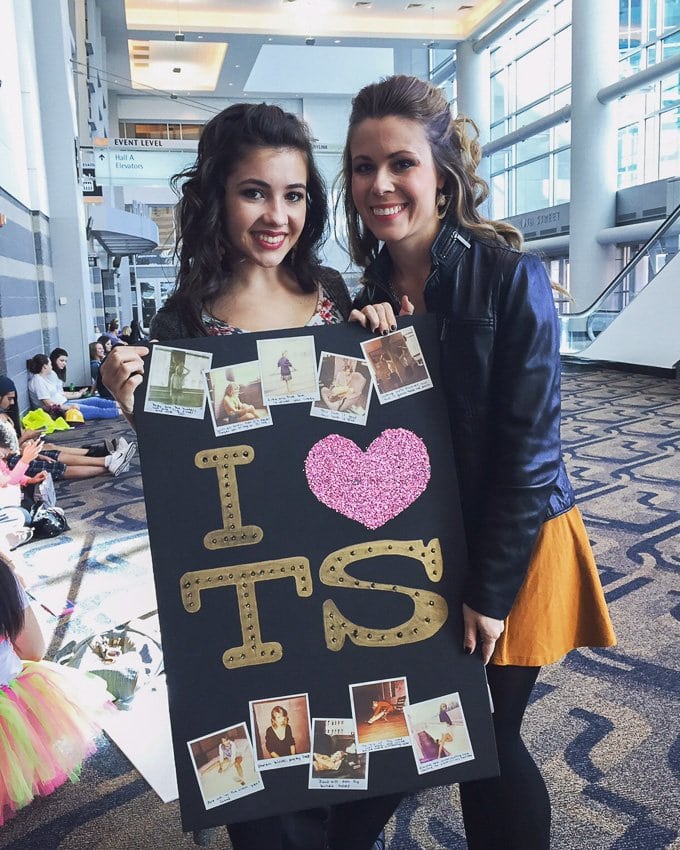 2. We got there early to mingle and be seen - most fans recommend that you arrive at least 3 hours before the doors open. We arrived just after 3 pm for an opening time of 6pm. Yeah, it's kind of a pain to get there that early. But if you bring snacks and talk to other fans while you wait, it's really a fun experience. Swifties are the best kind of fans, you see! Courtney and I had an awesome time looking at the costumes and signs from other fans. We would even talk to some of them to ask them about their costumes and take pictures with them. 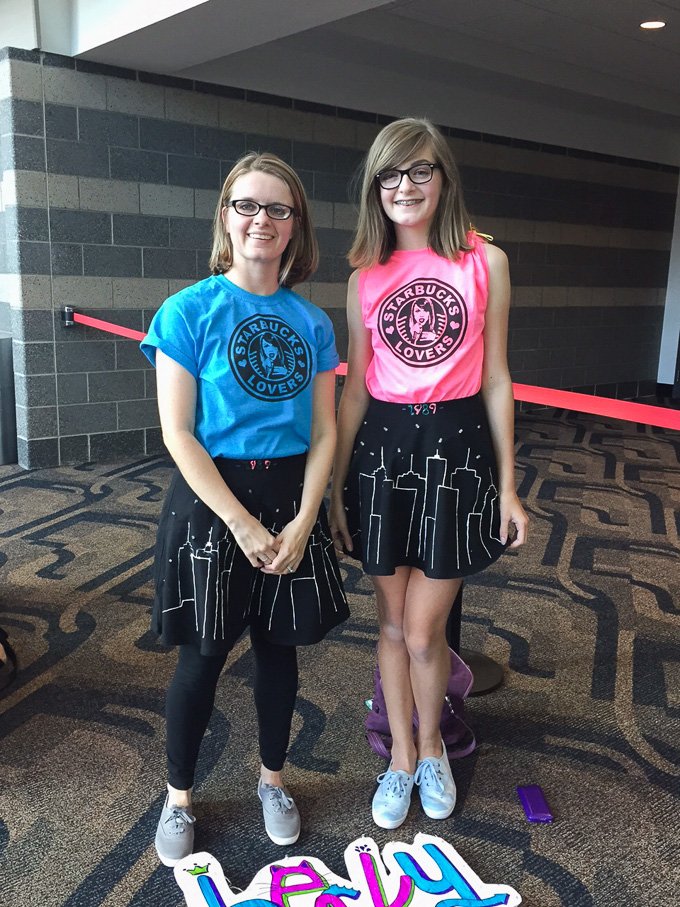 In the picture above, the cutest mom-daughter team dressed up like a scene from New York city. Their skirts even lit up! Below is a couple who dressed up like characters from the "Wildest Dreams" video - obviously a lion and then the glamorous movie star that Taylor portrayed in the video! 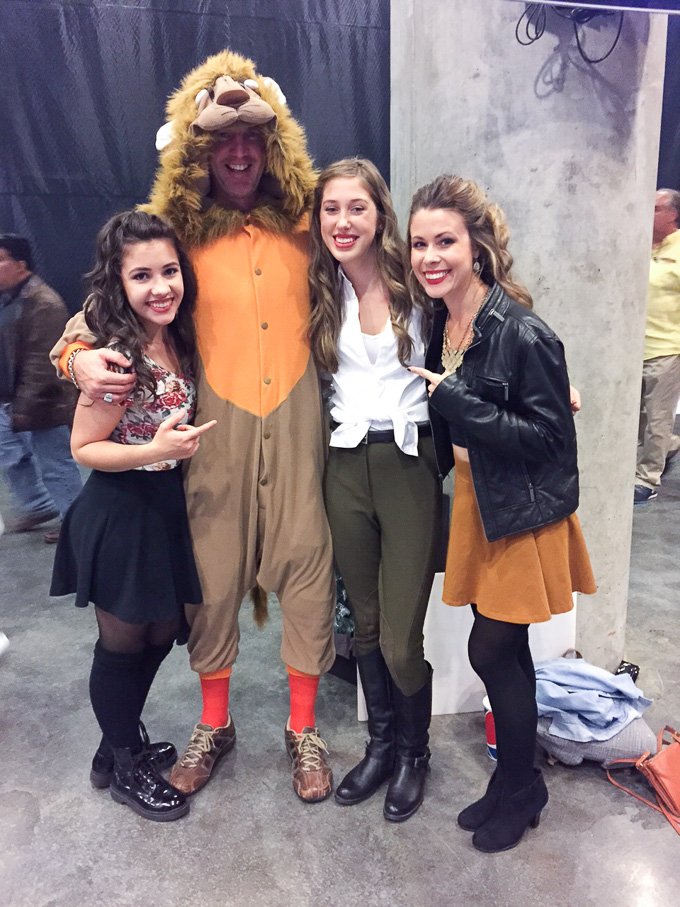 3. We visited Taylor Nation - there's a ton of interesting info on the web about the "official" fan club Taylor Nation and a LOT of speculation among fans about what their official role is during the tours. Some fans will say that members of TN have influence on what fans get upgrades during the concert or who gets invited to the meet and greets. No matter what the speculation of the night may be, ANY fan will tell you that it's essential to find the Taylor Nation booth (which is usually at an undisclosed location in the arena), chat them up, and have your pictures taken in the photo booths that they make for each tour. 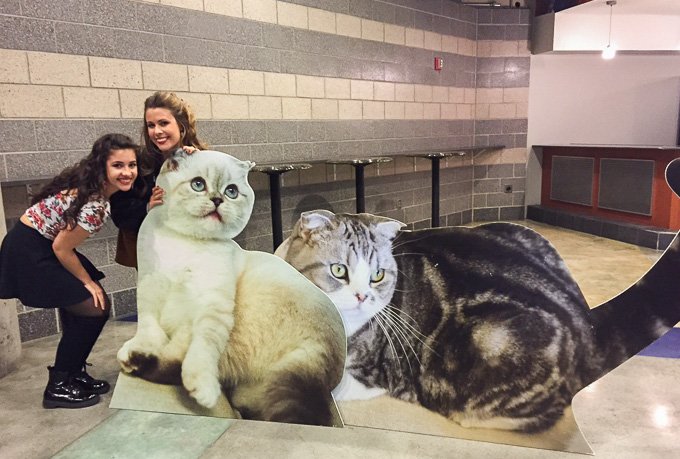 4. We made ourselves visible and Tweeted a lot - this involved tweeting pics of ourselves at the concert, with other fans, and tagging Taylor Nation in the tweets. I even tweeted them our seat section at one point because I'd read that helps them find you! We also stood up, waved our sign around and danced all through Vance Joy {the opening act} and during the time before Taylor came on. At one point, we were shown on the big screens with our signs, so I definitely think that helped us get noticed from our seats! 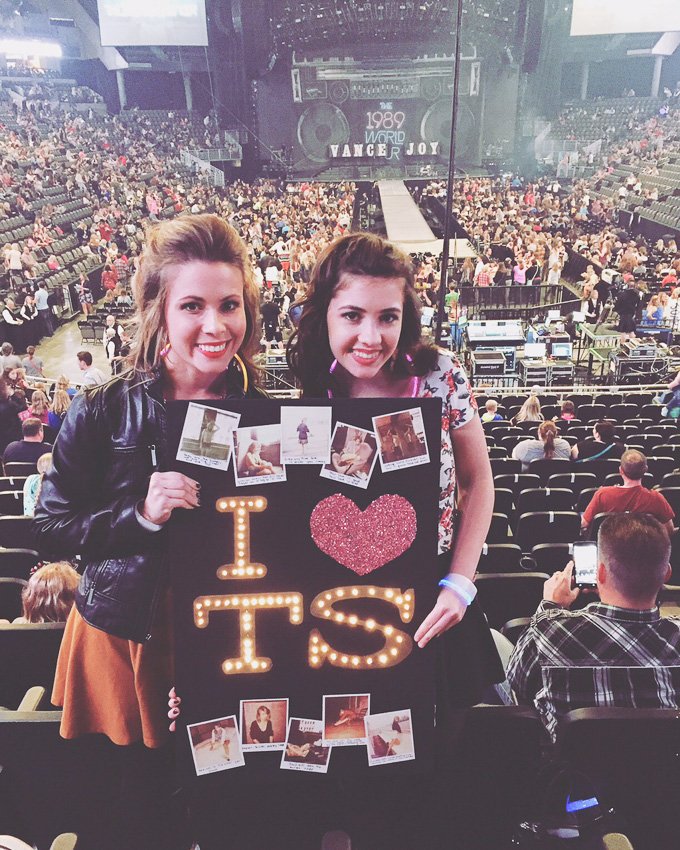 We even made a point to help other people around us get excited, which included these dads sitting in the row in front of us with wives and lots of kiddos in tow.....they were trying to make the most of their Taylor experience, so they asked to take a picture with our sign 😉 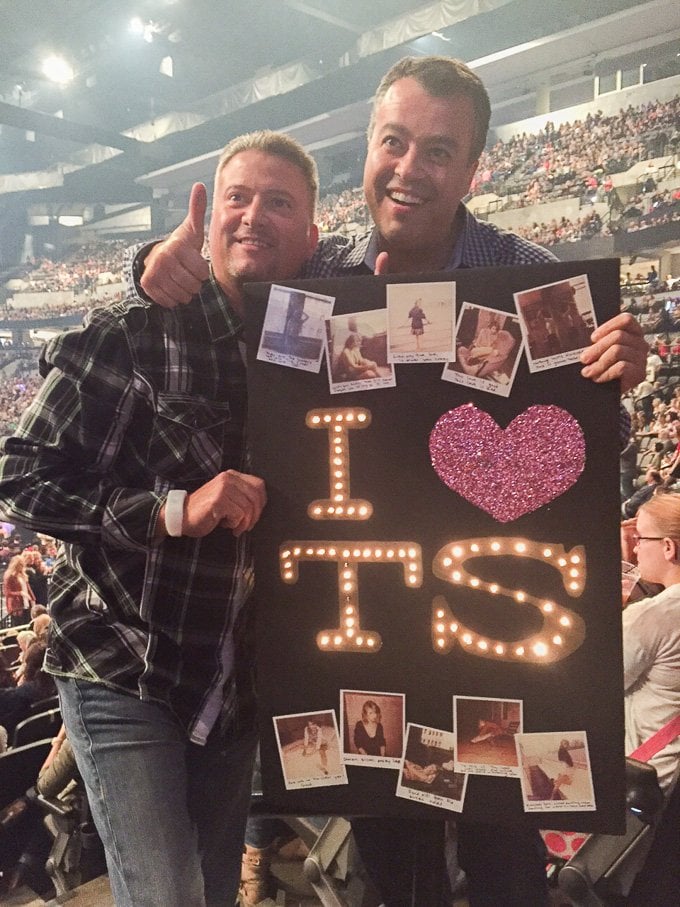 Taylor started the concert with "Welcome to New York." I'm thinking we must have gotten noticed early on, because it was during that first song that Courtney got a tap on her shoulder from an unfamiliar lady asking her if she'd like to go to the front of the stage! I looked over and saw Andrea talking to her and realized Courtney had NO idea she was talking to Mama Swift {she was so stunned she didn't recognize her}, but after Andrea said "I'm Taylor''s mom," she knew what was going on! 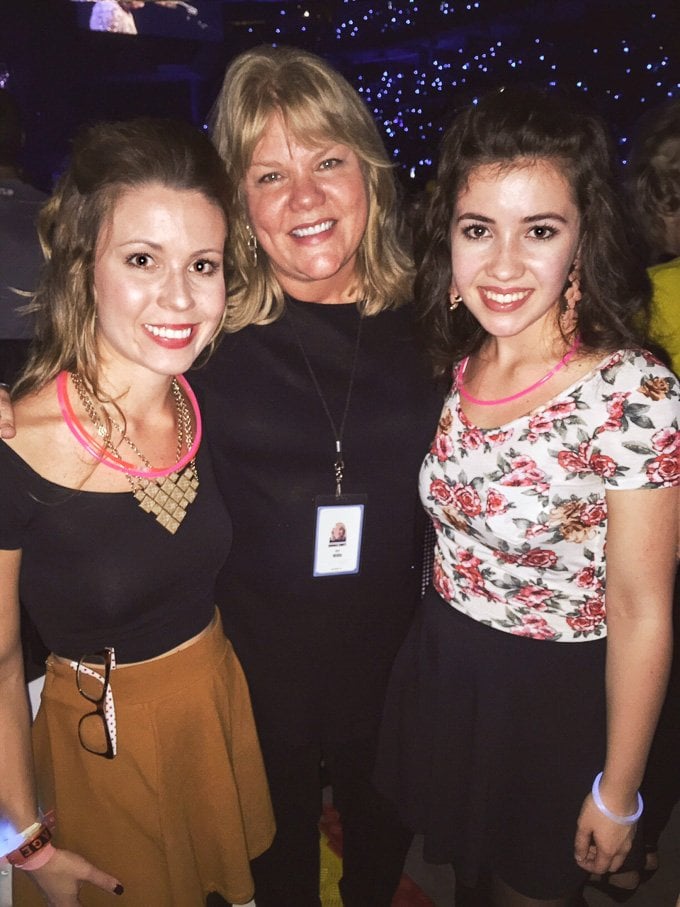 Mama Swift {and some security guards} took us down to the front of the stage with other fans they had collected and gave us bracelets that read "B-stage." This was a little section right at the end of the catwalk, so we had a really good view of Taylor whenever she walked the runway or stood at the end of it. 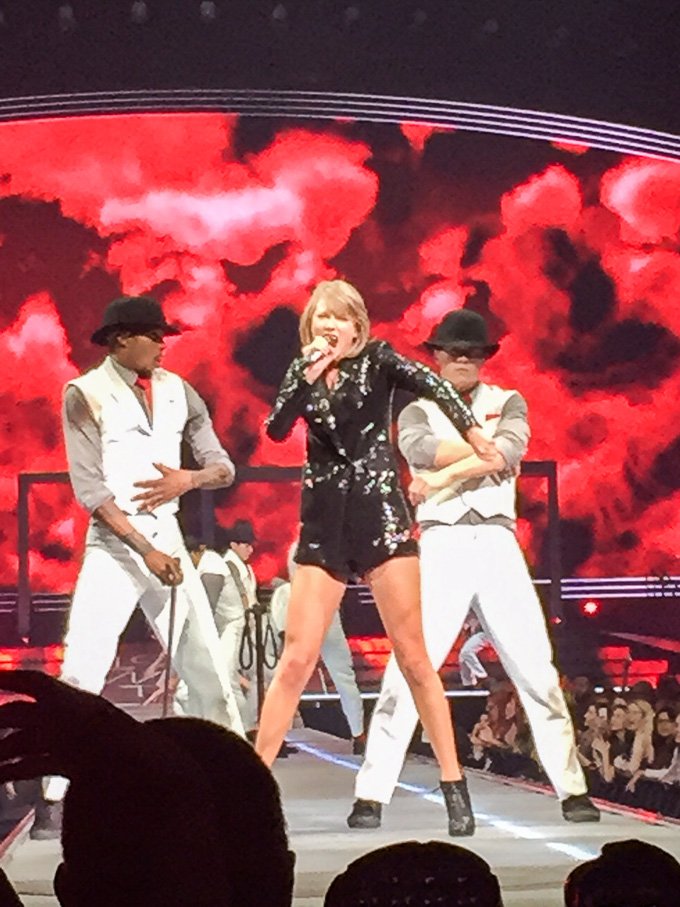 In my opinion, the really cool thing about getting "B-stage" passes is that you get to hang with Mama Swift during the concert! She watched most of the show from this area and would dance with fans and take selfies with them. Such a cool mom! It was so much fun getting to meet her and I loved seeing the looks on her face while she watched Taylor perform. I'm sure she's attended hundreds of concerts by now, but she still beams with joy and pride when she watches her daughter sing as if it were happening for the first time! 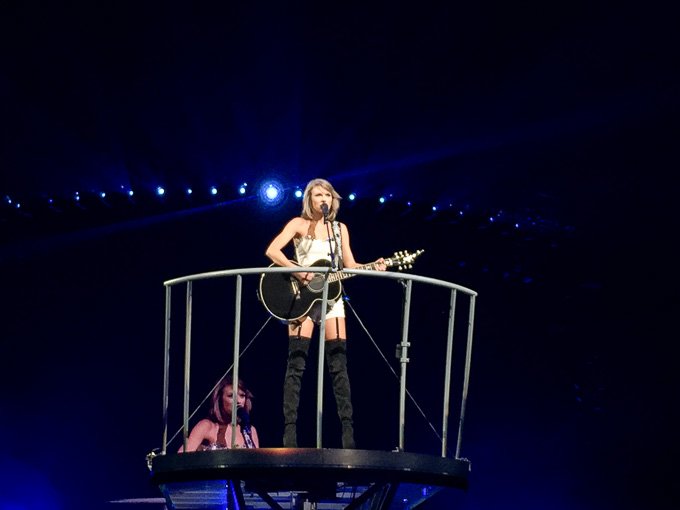 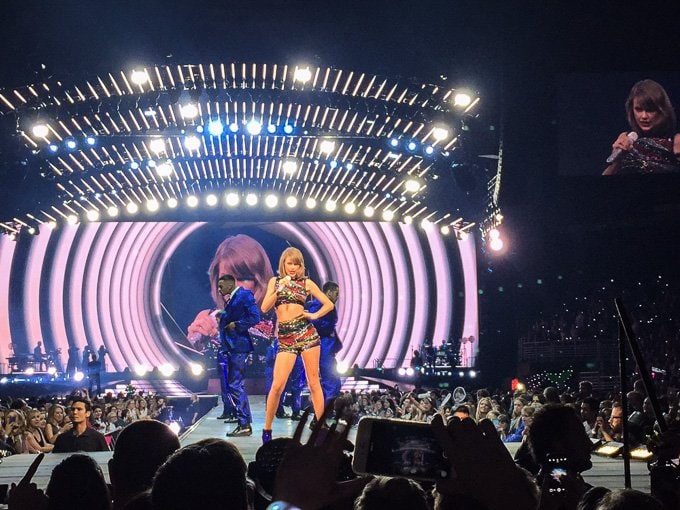 The 1989 concert was an amazing, high-energy, fun and exciting show that I'd highly recommend to anyone! We saw people from age 5 to 70+ having the time of their life because this show had something for everyone. 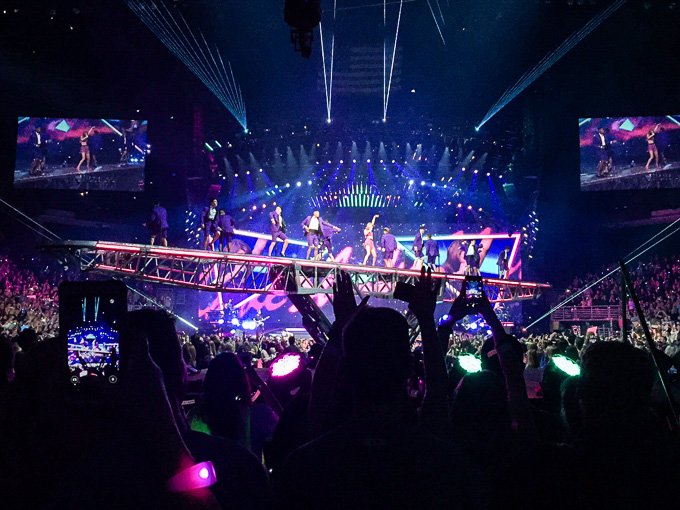 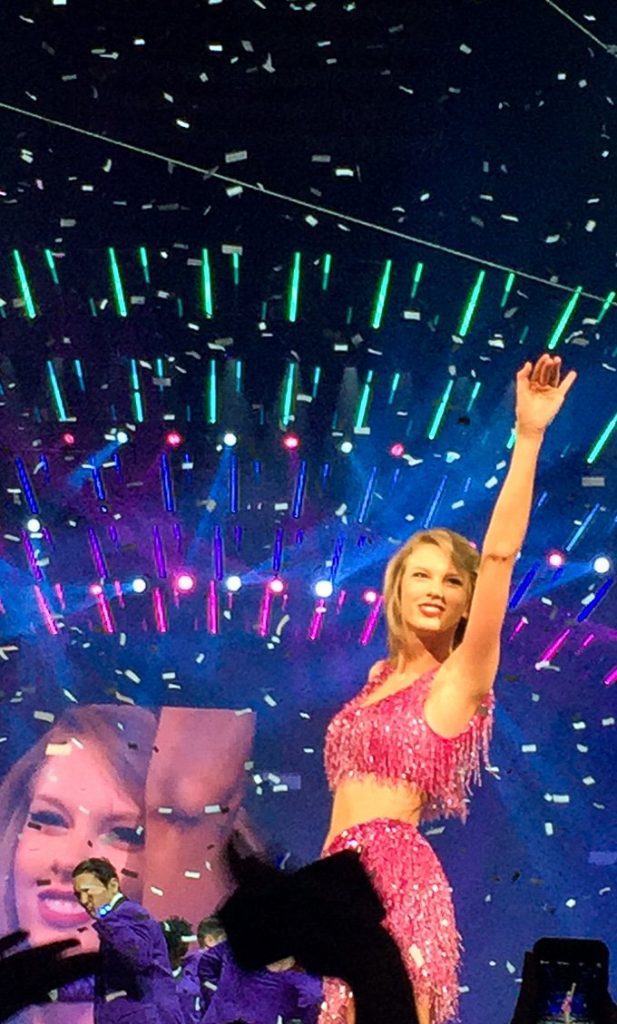 Of course, we had a blast!

Update - I will be going to see T. Swift in Nashville in 2018! Ryan is going with me this time. Stay tuned.

Have you ever been to one of Taylor's concerts? I'd love to hear about your experience in the comments section below!

If you enjoyed what you saw, feel free to look over what else I do here at Sweet Cayenne - some other popular posts include Summer Favorites 2018, Beauty Review: Signature Nail System (SNS) Manicure, Back-Pocket Chocolate Fudge Cake, or My All-Time Favorite Fixxer Upper Episodes.

New here? A little background on what Sweet Cayenne is all about – Most of my posts are related to food, however, I do lifestyle, beauty, and travel posts from time to time.