This easy Boiled Apple Cider Syrup is laced with the flavor of cinnamon and is a delicious flavor booster for adding into all of your favorite fall baked goods!

Welcome to Day 1 of Apple Cider Week! I'm SO excited about what is to come. This year, I've decided to celebrate one of my favorite fall and holiday ingredients with a full week of recipes that feature it: fresh apple cider!

Apples and all things related to apples are my favorite thing about fall - it's my dream to one day spend a month in New England just taking in the glory of apple season up north!

One particular apple cider ingredient that has intrigued me for some time now is boiled cider. I've seen lots of recipes that call for it - most often apple cider donuts and apple pies.

I've been tempted many a time to buy the boiled cider sold on King Arthur's website but recently discovered that it's easy to make it yourself at home. And I'm happy to report that it could not have been more simple!

Once you make your boiled cider, you can use it in any of the following delicious apple recipes:

I used a 5-quart Dutch oven, which was large enough to perfectly fit one gallon of cider into. The enameled cast iron material ensured that my cider would reduce quickly, evenly, and prevent scorching on the bottom. The wide surface area of the pot also helped cut down the time the syrup needed to reduce.

Step 1: Measure how far up the side of the pot the fresh cider reaches (see photo above) - you can use a wooden skewer for this or a wooden baking ruler. If you use a skewer, mark a line at the top point that the cider comes up the side of the pot. Divide that space into 8, and then you will see the ⅛ mark that you need to reduce the liquid down to.

All in all, one gallon of fresh cider should be reduced to just over 2 cups for a proper boiled cider consistency.

Step 2: Simmer the cider, stirring a few times every hour. The King Arthur Flour site says it takes 5-6 hours to reduce to just over 2 cups. However, my cider only took 3 ½ hours. I cooked it over a light simmer and stirred it twice every hour. The final consistency of the syrup should be similar to that of honey when it is heated.

Step 3: Strain the reduced syrup - this will remove any impurities or sediment from whole spices.

Step 4: Let the syrup cool a bit, then store in the refrigerator.

And that's it! Trust me, this is a really simple project that will yield a delicious flavor booster for all your favorite apple baked goods and recipes. You will love it!

Below are some of my best tips for making boiled cider, as well as some answers to commonly asked questions!

What can you do with old apple cider?

If you have a lot of fresh apple cider that needs to be used up, using it to make boiled cider is a great way to extend the shelf life! Once apple cider is boiled down to about ⅛ of its initial volume, it can be used as a flavor enhancer in baked goods, or reconstituted with water to make a serving of hot apple cider!

How long does boiled cider keep?

Once boiled cider is made, you can store it in the refrigerator for up to 3 months. Be sure to label and date your container! The boiled cider will become thicker as it is chilled, and is easy to use when stored in a Mason jar.

How do I know when my boiled cider is done?

Boiled apple cider is done when it reduces by about ⅛ of its initial volume. It should be the consistency of warm honey, so if you don't know what that's like, warm a few tablespoons of honey in the microwave for 30 seconds. The cider will form copper bubbles on the surface as it is simmering when it is done.

Initially, your boiled cider may not seem very thick. However, it will thicken as it cools and even more so once it is chilled. Cider that is overcooked will have a thickness similar to that of molasses and a sour, even bitter, flavor.

You can make any of the following recipes with this boiled cider syrup:

Are you ready to make this Boiled Cider Syrup? I’m so excited for you to try this recipe. Once you get the chance to make it, please let me know how it turns out for you! 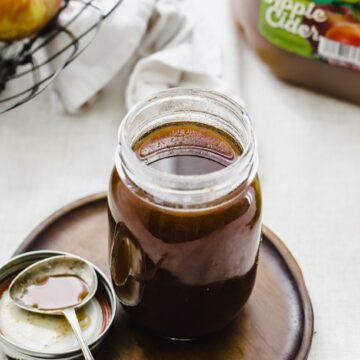