These creamy Boiled Cider Pecan Pralines are a soft, tender praline candy filled with toasted pecans and laced with the flavor of boiled apple cider.

Today I'm so excited to be sharing a recipe inspired by my mom and dad's all-time favorite candy: New Orleans pralines - or PRAH-lines, as they say in Nawlins'.

I've been enjoying pralines with them since I was a kid, and even remember a care package they sent me in school once with pralines from a visit they had made to New Orleans! Their love for pralines runs deep - there was a sweet lady in our church years ago who used to make them for our family all of the time (hi, Mrs. Betsy!).

Here are some specifics about what I wanted in my pralines:

Now that you have all the sweet details, let's make some pralines!

Ingredient amounts/instructions listed in the recipe below.

Toast the pecans - the pecans will get lightly toasted for 7-8 minutes before you proceed with the recipe. Once toasted, have them on hand nearby in a bowl.

Melt the sugars, butter, and creams - do this over medium heat, stirring often.

Boil the mixture - the mixture will start to simmer at first and boil slowly. You can stir throughout this process, but once it starts to boil rapidly (see the picture in the bottom left corner below), stop stirring! At this point, you will let the mixture boil rapidly for 2-4 minutes until it reaches the soft ball stage indicated on the candy thermometer, which is between 236 and 240 degrees F. I take my candy mixture off the heat when it's between that range.

Add the pecans and stir - the mixture will still be very hot, so be careful! You will stir thoroughly for 2 minutes to thicken up the candy mixture - it will turn a paler color that resembles peanut butter. The picture in the bottom right corner below is what the mixture looks like just before the stirring begins.

Drop mounds of the praline mixture onto parchment - you want to do this as quickly as possible because the candy mixture will set quickly once it starts to cool. Ask someone to help you scoop it out if needed! I just use my wooden spoon to dollop rounds on the parchment that are about 2 inches wide. The last pralines scooped out always look the worst, but still taste delicious!

Cool slightly and enjoy! Pralines are best enjoyed while still warm, after 10-15 minutes of cooling. After a day or two of airtight storage at room temperature, they will start to get hard and crumbly. If you can enjoy them within 1-2 days, freeze them in an airtight container for up to 3 months. Sit out at room temperature for an hour before eating.

**Note: I've read that making pralines on a very dark/rainy day can prevent them from setting properly. I haven't tried this, but from other types of candy making experiences (looking at you, candy glass), I try and making candy on sunny days!**

Complete instructions are found in the recipe below.

The picture below is of a freshly-scooped praline - you'll see it's still slightly shiny....

As the praline cools, it will start to become cloudy. The little white specs around the nuts are called "bloom" from the sugar. At first, I thought this was a sign of overmixing. But after making the pralines again, looking at lots of pictures online (including from Savannah's candy kitchen), talking to people who make pralines, and reducing the stirring time, I've learned that this is just a natural occurrence when making homemade pralines. Don't worry about it - the pralines taste delicious!

Are you ready to make these Boiled Cider Pecan Pralines? I’m so excited for you to try this recipe. Once you get the chance to make it, please let me know how it turns out for you! Leave a comment and rate the recipe below. This will help me with the creation of future recipes! 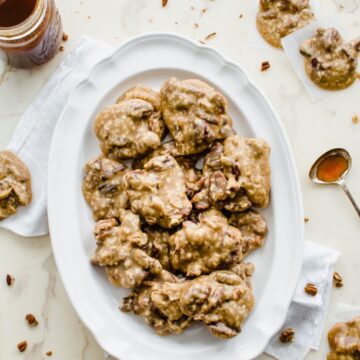