Let's get our sipping on with an ice-cold, gorgeously-hued Applepom Fizz sparkling apple cider mocktail. It's the perfect drink for when you want fall flavor when it's still hot outside!

This Applepom Fizz is really an easy, sparkling apple cider mocktail recipe with only a few ingredients that can be made ahead. Here in middle TN, it's pretty hot through October, so this drink is perfect for enjoying fall flavor in a cold beverage.

What makes this drink special is the super-reduced pomegranate syrup. Basically, we cook down an 8-oz bottle of pomegranate juice down to about ⅓ of a cup. While it simmers and reduces, aromatic slices of fresh ginger and a cinnamon stick flavor the juice and fill your kitchen with the most amazing fragrance!

Once the juice is reduced, a bit of maple syrup gets swirled in to add a hint of dark, moody depth of flavor. But not too much! The goal here is to let the crisp, clean and bright flavor of the sparkling cider shine through.

This non-alcoholic apple drink can be assembled as needed for individual drinks, or in a large punch bowl for serving a group. If you are serving it at a party, I recommend using colored ice cubes made from apple juice that have cranberries and pomegranate seeds frozen inside for that special touch!

Step 1: Make the pomegranate syrup. You'll reduce 8 ounces of pomegranate juice down to about ⅓ cup with fresh ginger and a cinnamon stick. Strain the syrup, then add a bit of maple syrup.

Step 2: Mix the drink. You'll combine sparkling cider, club soda, and the pomegranate syrup, pour over ice, then serve with a thinly-sliced apple and/or a cinnamon stick!

Below are some of my best tips for making this apple cider mocktail, as well as some answers to commonly asked questions!

Can this mocktail be made ahead of time?

You can make the pomegranate syrup one week in advance, but I would not mix the drink until you are ready to serve it to avoid a loss in carbonation from the sparkling cider and club soda.

Is there non-alcoholic apple cider?

Most apple cider that you buy in the produce section is non-alcoholic! Cider with alcohol is typically labeled hard cider, and will have the alcohol content listed on the label.

Is there any alcohol in a mocktail?

No - the word "mocktail" stands for mock cocktail, and indicates a cocktail-like drink with juices, sodas, herbs, and spices that does not contain alcohol.

What's the best alcohol to add to apple cider?

If you'd like to make this Applepom Fizz a cocktail, I would suggest adding bourbon, calvados (apple brandy), whisky, or a sparkling white wine.

This drink screams fall and begs to be enjoyed outdoors, so I can see it pairing really well with anything you'd serve at a cookout, barbecue, or tailgate party.

It would be delicious with a cheese board, with Bacon Wrapped Dates, served alongside pulled pork with Cabbage and Apple Slaw, or with a Rustic Sausage and Red Grape Pizza! If you'd like to serve it with burgers, I would highly suggest trying these Blackberry Basil Sliders, which are topped with sliced green apple!

If you'd like to make this a cocktail recipe, I'd suggest subbing in a hard cider for the sparkling cider, or keeping the recipe the same and adding in an ounce of Calvados (apple brandy) or bourbon.

If you are in search of more refreshing apple recipes, be sure to check out my Red Cabbage Apple Slaw, Apple Cranberry Sauce, and this Massaged Kale, Apple, and Cranberry Salad!

Are you ready to get make this refreshing Applepom Fizz mocktail? Good! I’m so excited for you to try this recipe. Once you get the chance to make it, please let me know how it turns out for you! 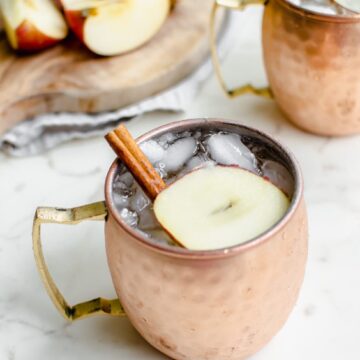